By Thimira Amaratunga January 04, 2011
I recently bought a RC Helicopter - a Falcon 8911 4-Channel  RC with a built-in Gyroscope (Gyro for short). It's the first time I've seen a 4-Channel RC helicopter, let alone a one with a gyro, in the Sri Lankan market. The heli was pretty good, although I still need more 'flight training'. 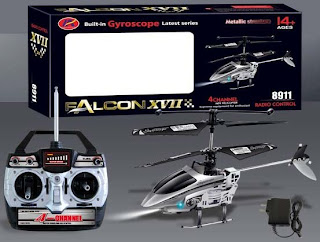 I will do a separate post on my heli ;)
The thing that interested me most is the gyroscope. I knew the basic concept of a gyroscope but didn't know how it applied to helicopters. So I did a little research on the internet and found out a lot about gyros. To others who are interested, here's what I've learned.

First of all, what is a gyro? A gyroscope is a device for measuring or maintaining orientation (a.k.a. angular position). The most basic is the mechanical gyro. A mechanical gyro is essentially a wheel spinning at a high rated speed and whose axle is free to take any orientation. Based on the principles of conservation of angular momentum, the orientation of the axle remains nearly fixed, regardless of any motion of the platform on which it is mounted.

Apart from the mechanical gyro, there are other types of gyros that are based on several other operation principles. These include solid state Ring Laser Gyroscopes, Fiber Optic Gyroscopes and super sensitive Quantum Gyroscopes (I wont go in to detail about these because they're bit complicated to explain. If you like to know about them leave a comment and I'll try to do a post on then too)

The most common type of gyro used today is the piezoelectric gyroscope, which is a type of vibrating structure gyroscope (a.k.a. Coriolis vibratory gyro). These works on the principle of 'a vibrating object tends to continue vibrating in the same plane as its support rotates'. Piezo gyros are found in many consumer electronic devices because of their small size. These include model aircrafts, computer pointing devices, mobile phones (e.g. iPhone), game controllers (e.g. Wii Remote), etc.

Lets see how they work with model aircrafts in the next post :)

Popular posts from this blog

What is the meaning of the numbers on Brushless Motors?

By Thimira Amaratunga March 21, 2011
If you go shopping for Brushless motors you will be confronted with a lot of numbers to choose. For an example, you would see motors marked with 3632 22turn 1500Kv, 2213 20turn 920Kv etc. So what does all those numbers mean, and how would you choose? Here's a simple guide...

Let's take this motor for an example,

Selecting the Correct Gauge Wires for your RC Models

By Thimira Amaratunga May 28, 2017
When we are building RC models (aircrafts, multicopters etc.), something we typically overlook is what type of wires to use to distribute power in them. Usually, we try to reduce the weight of the model, so we tend to go with smaller wires.

But, we cant expect to put in small circuit-wires and have them handle the amount of power needed.

These need to be huge to handle the amount of amperage that goes through them.

So, we should also consider the amperage, and the length of wire needed when selecting the size (gauge) of the wires.

Generating a PWM Signal Based on an Analog Input - mikroC

By Thimira Amaratunga February 22, 2011
If you like to experiment with microcontrollers you've probably tried out analog-to-digital conversion and generating PWM signals. Using a popular PIC microcontroller like the 16F877A, which has both ADC and CCP (Capture/Compare/PWM) modules, you can test out both of these easily because mikroC provides easy to use library functions for both of them. (Most of you will be familiar with these libraries, so I won't be going in to much detail about them here. Leave a comment if you like to learn more.. :) )

Now, think of a scenario like this: You want to change the duty cycle of your PWM signal based on a analog signal. It can be from a variable resistor that you want to use to increase or decrease the duty cycle, or it can be a feedback from a sensor which is analog.

So, how can we do it?... we simply use the ADC to convert the analog signal and use that value as the duty cycle value. All we need is a microcontroller that has both a CCP and a PWM module. As I said before, the p…
4 comments
Read more